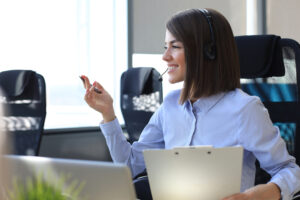 We’ve all been there. You hang up with a customer and say, “Gee, I wish I recorded that.”

Maybe things went poorly. Maybe you’re having a difficult time remembering a date, time, or name. Maybe you need a coworker or supervisor to weigh in on something and you don’t want to get it wrong. Or maybe it’s a few months later and a customer has forgotten that you told them something and you need some proof.

Whatever the reason, call logging, better know as call recording, is invaluable in the situation when you need it. And it’s something you don’t think about at all until you need it.

We’ve written in depth about call recording and its legalities in previous blogs. Today we’re going to talk about features that differentiate a good call recording system from a mediocre one including one feature that only Zultys, our manufacturer-partner provides.

Call Logging is fast becoming a standard add on (or included) feature for new telephone systems. As VOIP and Cloud technology have thrived, what once was an expensive and time intensive feature has gone mainstream.

As you can imagine in the analog days, call recording would have required extra resources and expertise. Any recordings would need to be catalogued on tape and then need to be searched for individual relevant parts of a conversation. Someone on staff would need to understand the equipment and keep track of the recordings.

Even once we entered the digital age, storage cost money. But once people started carrying around entire terabytes of storage on a thumb drive, the possibility of call recording moved from the exclusive domain of big corporations to the realm of small business.

Just like then, now we have 2 basic types of call recording – on demand and always on.

Their definitions are straight forward and are exactly what they sound like. “Always on” call recording refers to every call being recorded on the system. Typically there are ways to exclude particularly calls or callers or even pause the recording but the general rule is, if you’re on the phone, it’s being recorded.

Each type of call recording has its pros and cons.

With always on call recording, you never miss anything. If any of the scenarios mentioned in the opening paragraph occur, you are covered. On the other hand, you do record a lot that you don’t need and you have to have storage for all of it. Also, if you live in or are speaking to someone in a state that requires 2 party consent for recording, you must let the person on the other end of the line know that the call is being recorded.

With on demand call recording you have a little more say of what’s being recorded. It takes less space but it’s a lot easier to miss something. What happens if you get into the conversation and realize afterward you should have been recording? There’s nothing you can do. Or at least there used to be nothing…

Having unlimited call recording isn’t very useful if you have no way to easily search it to find what you need. Since we’ve moved beyond the days of reams of digital tape, there’s no reason you shouldn’t have an easily searchable database of recorded calls.

The simplest call recording systems will record to voicemail. That’s ok if you only have one or two to look through. But when you make dozens or hundreds of calls, it’s better to have a system that looks more like an email inbox.

Like a good email inbox, the best call recording management solutions have easily searchable properties such as extension used, incoming or outgoing call, number dialed, time of day, date and even length of call. Be sure to look into the specific search ability features before committing to any call recording solution.

While its great to have a record of every call made, there may be times you want certain personnel to not record a call or part of one.

Most high quality telephone systems have the ability to allow users to turn off call recording.

Turning off recording can be done for a call or part of a call depending on the system. It’s nice to have both options available.

Most businesses allow employees some opportunity to conduct personal business when necessary as long as the privilege isn’t abused. When employees are speaking with family or dealing with personal issues such as a phone call with a doctor it is reasonable to allow them to turn off the call recording feature.

Many systems also allow reports to show who turns off this feature and when, which allows employers to notice problematic patterns.

There are even times when speaking with a customer that you may want the ability to temporarily turn off call recording. A good example of this is when a credit card number is being read. It’s a liability to have that information recorded.

And finally, the moment you’ve been waiting for…

While it has been possible to pause recording in many systems for a while, one feature that has remained elusive is retroactive on demand call logging.

Sometimes you’re on a call and realize too late you should have recorded it. With retroactive recording you can hit record and a record of the call will be stored from the beginning of the call!

This eliminates those “I really should have…” moments and also allows users the discretion of only recording certain calls. This can be useful for certain users who deal with too much sensitive information for always on recording to be practical. It’s also a useful feature when a business doesn’t want to have call records taking up a lot of storage space.

Like most telephone features, all the call logging features discussed in this blog can be programmed on a by user basis so that different users will have different privileges. Certain employees may always needs call recording. Certain should only have it at specific times. Regardless of your needs a good reporting package can make sure that your call recording features are being utilized properly and effectively.