Out of the Mouths of Centurions 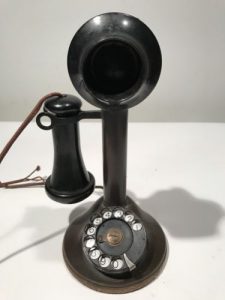 In November 2014, the Roanoke Times published an article by reporter Zach Krizer about Centurion resident of Wirtz, Virginia Rosa Beckner. The article was written to commemorate her supercentenarian birthday. She turned 111 on November 11, 2014 or 11/11.

In the article, Mrs. Beckner talked about her family, her diet, her exercise regimen (she uses bean cans for reps) and the changes she’s seen in her lifetime. When asked what the most significant change she saw in her lifetime was, she answered unequivocally: the invention of the telephone.

“She remembers the amazement they felt when they realized they could use that device, screwed onto the wall, to get just about anybody on the line. And now, she said, ‘You carry them in your pocket.’ ”

Despite computers, social media, the moon landing, self-parking cars and everything else we’ve thought up in between, it’s telephones that made the biggest impression.

It’s amazing when we think about how much most of us take it for granted, but it was the telephone, long before the internet, that made it possible to connect people across this country, and later the world. Today you rarely fill out a form that doesn’t ask you for three telephone numbers.

Most of us can remember the excitement around a “phone first” – the first private line the first cell phone, the nervousness around the first time your parents let you answer the phone as a small child.

Almost all of us can remember a significant life event that couldn’t have happened without a phone. Telephones connect us to each other and are still considered by many to be the only way to deliver truly life changing news when doing it in person is not an option.

In business, telephony is even more important. As we say, your phone system is like the lobby to your building – it’s the first impression many clients get of your business.

We write about many of the changes on my blog. Some developing countries are skipping over setting up a phone communications grid and going right to cell phones. Here in the US, we’re moving in the direction of all internet based service. It makes me wonder what might be next. There are some changes that we don’t know about yet which is why getting technology that promises to be compatible with future technology is so important.

What changes do you expect to see? What changes are you hoping for? What are you curious about? What scares you?

This may be a good place to introduce yourself and your site or include some credits.