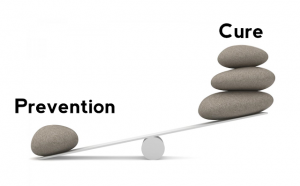 An Ounce of Prevention…

You’ve surely heard the phrase “an ounce of prevention is worth a pound of cure.” You may even know who originally said it. It’s been used in many scenarios and environments since it’s original inception and it generalized out well. The phrase is certainly relevant to our area of expertise – telephone systems and IT support of all kinds. Most people think it originally referred to health but in fact, the first time it was mentioned it was in reference to fire safety. But I digress.

You have probably heard or said some variation of one of the following – it’s working now so why replace it? It’s not great but it’s not my top priority. I’ll just keep using it until I can’t. I’m too busy to deal with a problem that isn’t mission critical. The phrases may have been in reference to a car, a smart phone or your business technology purchase.

Another phrase often used in terms of healthcare is “Pay now or pay later.” I’ve personally used the phrase to describe why I thought it was important to buy food with fewer additives. It may be more expensive but you know what else is expensive? A major health crisis!

In fact, a more accurate description of it in both health and business technology is pay now or pay dearly later. Because while no one likes to spend money now or later, it hurts more to spend it on something you don’t want to be doing – like a hospital stay.

Plus at that point you’re not just spending money, you’re spending time and probably in pain.

How does that relate in real terms to a phone system or computer network? Think about it.

If you replace an outdated piece of equipment, you get new features and you can plan it out to happen at a time of year or time of day that is convenient and easy for you. If you wait until it’s broken you’re in an emergency situation. You are not hearing from clients. You can’t call the outside world. It’s the tech equivalent of an ER visit – inconvenient, painful and expensive. You even have the added cost of paying for new parts to be overnighted and the overtime to have an emergency repair done immediately.

But there’s one more thing. The choice of pay now or pay later is a false one. In reality, if you don’t buy a new product you are paying now and paying later. When you lose calls, you are losing sales now. So you are paying. When you have to keep fiddling with a computer or performing the same actions daily to make your network or telephone system operate properly, you are wasting time, which is the same as wasting money.

If time is money, and you are trying to save money by not replacing your aging equipment, but you your equipment is wasting a lot of time, then you are in the red!

That’s something Ben Franklin knew when he first brought up his ounce versus pound analogy. Did you guess right?