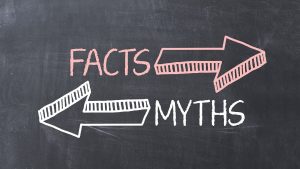 We all face anxiety from time to time…or all the time.

Anxiety comes from the unknown and unknowable. As a business person, you may have anxiety over profits, employee retention, marketing or something particular to your own business.

One place many business owners or managers face stress is security. But it’s one place that you can take some very direct steps to minimize your risks.

Unfortunately, due to a lot of misinformation and apprehensions, many people believe that surveillance is not for them.

Today, I would like to dispel some of those myths.

Surveillance doesn’t have to be expensive. Smaller effective systems can be quite affordable. Besides the fact that camera and storage prices have gone down significantly over the years with IP technology.

More importantly a single incident can potentially cost more than the cost of the camera system.

And that goes without even thinking about safety concerns. For more information on money saving statistics, see this earlier surveillance blog post.

Finally, with a payment plan, your security costs can be divided over several months or years.

Surveillance Myth #2: I can just install a camera system I bought from the store.

Ok, I said systems can be affordable but you don’t want to go that cheap. Why? There are a few reasons. First, it’s better to have a surveillance system installed by a DCJS licensed company. In VA, a company must be licensed by the department of justice in order to install and service security cameras. If you are talking to someone about doing the install for you, make sure it is a licensed company.

Secondly, although you can install a system yourself legally, having someone with experience can be immensely helpful. Besides all of the technical issues that may come up, having a professional who knows how best to position cameras from a security standpoint can be invaluable.

And finally, the camera systems you can get from a retail store are not high quality. After a theft or dangerous situation, you may be able to tell that someone did something. But other than seeing a form was vaguely human, you’re not going to get a lot more information unless the person you’re filming is intentionally going for a Hollywood close-up.

Surveillance Myth #3: The storage will take up too much space.

When I was in college, I was a manager at a local Blockbuster Video store. (I doubt this had anything to do with their eventual closure.) Every night, in addition to counting money, restocking shelves and making sure store was ready for the morning, I would put a new VHS tape into the VCR that recorded our security. We kept each for a year and then taped over it.

Those days are over.

Now that everything is digitized you can restore an enormous amount of video on a 2-terabyte hard drive. Further, with today’s technology, you can program cameras to only activate when there is movement so rather than having to record 8 hours or nothing and then go over it later, you can skip right to the exciting parts – that’s all there is.

Surveillance Myths #4 and 5: One camera will cover it/ It would take too many cameras.

There are some very efficient ways to cover large areas. There are cameras specifically designed to capture 180 degrees or more. Further when cameras are installed by security professionals, placement can be made in ways that will cover the maximum amount of area, or the most important areas while staying within your budget.

That being said 1 camera (or worse one fake camera) are not going to do the trick. Cameras can be helpful as a deterrent for theft or other bad behavior but if it does occur, you want to have the real thing. Plus, if you’re dealing with a professional criminal, they can tell whether a camera is real of fake.

So, I’m sure there are a lot of other surveillance myths and questions out there but hopefully I’ve helped clear some of the errors. If you have surveillance or other technology questions, fire away in the comments section.